How To Have Conversations with People Who Disagree with You

Conflict management techniques are not something we learned as well as maybe we could have when we were young.

There’s a great quote by leadership expert and author Linda Lambert that I love.  It goes, “One good conversation can shift the direction of change forever.”

As a divorce mediator, I cannot say how many times this quote has been proven true. Oftentimes, couples get stuck in what I call an “argument loop” – disagreements that keep going in circles because everybody wants to talk… but nobody is willing to listen.

Divorcing couples are obvious examples of conversations gone awry, but disagreements can happen in any relationship. If you study conflict management techniques, you will quickly learn that conflicting with people doesn’t necessarily always mean we can’t get along, or that we have to cut ties.

Here are some ways you can have better conversations with people who disagree with you:

When we are in an argument, it is easy to overlook how we can be contributing to the conflict. Observe how you respond to what the other person is saying. Are you being reactive? Are you stirring the pot? Are you listening to one-up, or retort rather than to understand?

This is a tough pill to swallow, but here it is: the other person may not always the only one at fault. Though we may not be aware, more often than not, there are things we are doing that add more fuel to the fire – rather than quench it.

Changing the way we communicate doesn’t happen overnight, but it can always be improved. Remember: while it takes two to tango, especially when conversations turn into arguments, it only takes one to begin shifting the dynamic.  If not into something perfect, at least into something better.

Believe it or not, listening is a  skill.

Active listening requires you to listen to not just what the other person is saying, but also to their tone, their body language, and even to what they’re not saying. When we do this, we can begin to truly understand where the other person is coming from – and this can be key to resolving disagreements.

For example, maybe your office mate who is always curt towards may not be trying to be rude; they could just be trying to hit a deadline and lack the skill for niceties when under pressure. Maybe your ex who is adamant about not letting you have your marital home isn’t unreasonable; they could be deeply concerned about their living situation after divorce.

Most of the time, you’ll find most of what comes at you isn’t really isn’t about you – it’s about them!

. Let others know you hear them

Sometimes, people just want to know they are being listened to, they want to be heard.  This is a major reason why so many people run to court.  They just need some validation. It can be difficult to access our rational brains when we are emotionally charged – our rational brain is kicked to the curb because we feel that we aren’t being seen or heard.

It is possible that the other person isn’t willing to listen to what you have to say because they feel like you aren’t listening to them.

As complex as this sounds, the solution is quite simple: show them that you are listening. You can do this by making eye contact, saying “go on” or “okay” unobtrusively as they talk, or repeating what they said in your own words to check your understanding.

4. Shelve relationships or conversations that are not working

Not all conversations need to happen at the moment. In fact, it is exactly when you are “in the heat of the moment” when you should take a pause and regroup. Sometimes, it is far more productive to stop the conversation before it gets any worse, and circle back to it when cooler heads prevail.

This is the same of relationships; there are people that we love that we may not like very much in any given moment – and even though it may feel like you can’t stand them anymore, often, it doesn’t mean we immediately have to cut ties. We can simply take a break from them by politely refusing engagements or hitting that pause button on our newsfeed – until we are in a better headspace to interact again.

The art of conversation can be a tricky one, especially when you are having one from opposing positions. But while getting the other person to make a 180-degree turn on their views might seem like the only acceptable resolution, there are many other ways to manage, maintain, or even improve relationships with the people that matter to you, or to your children. Sometimes shelving part of a dynamic, even for ten minutes, can change the landscape of the communication dramatically for the better.

Some links and posts are from our sponsors. Here’s how it works.
P.S. Want more tools and resources to stay positive during a divorce? Download my Free Divorce Survive & Thrive Kit below! 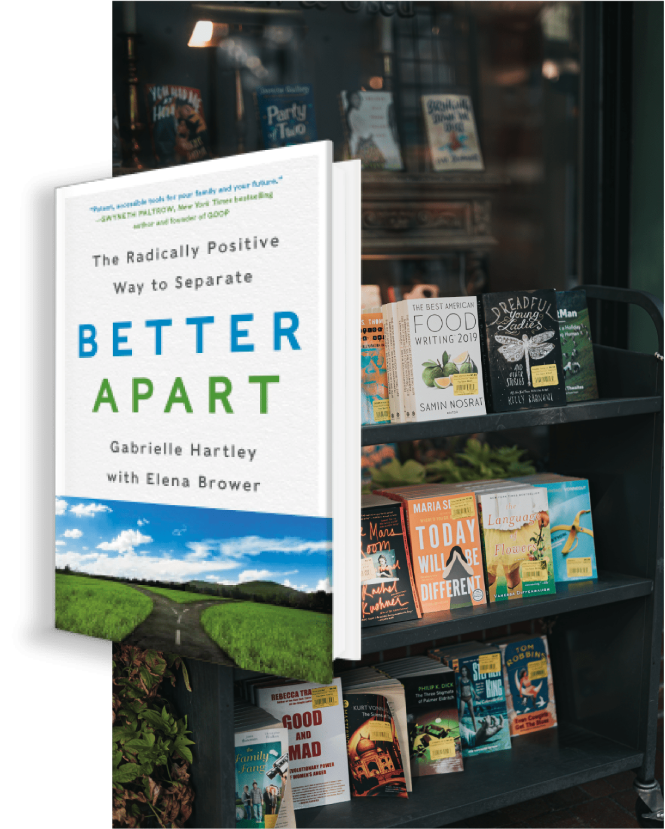